on orders over $69.99 within continental US

Is Cardboard Safe for My Bird?

Welcome to the Make Your Own Bird Toys blog and the new online resource for fans of my friend and parrot enrichment guru Kris Porter. 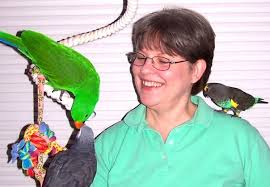 Many of you may know Kris Porter as the creator of The Parrot Enrichment Activity Books.  These books are incredible resources packed with tons of great enrichment ideas and they are available as free PDF downloads here:

Kris has also created some video content for our blog to demonstrate toy-making as well as on how to encourage your parrot to forage.  Additionally, she has contributed additional posts where she further elaborates on the ideas presented in the Parrot Enrichment Activity Books.

Over the years, I've incorporated the use of a variety of boxes into my toy designs because my birds have always enjoyed destroying empty food boxes, corrugated boxes and paper towel tubes.  All of these items make for great bird toy components and they can also quickly serve as inexpensive and impromptu foraging devices.

One of the topics that I often see being discussed on the internet is the question of whether it is safe to use cardboard in homemade bird toys.   For example, numerous times I've read that the glue used in paper towel tubes is toxic because it contains zinc.    As is the nature of the internet, once a tidbit of information is posted it often gets, please forgive the phrase, parroted over and over again on multiple websites and forums until it becomes "conventional wisdom".

My nature at times is to challenge conventional thought and to not always accept things at face value.   However, I also want to make sure that I am making reasonable decisions when it comes to the safety of my flock (not to mention everyone else's birds).  So, in order to address the all important safety question, I did some homework and would like to relay what I found.

Cardboard is primarily composed of wood pulp from pine trees. The pulp has the consistency of runny oatmeal, which is then heated and pressed into sheets of paper.

Single ply cardboard, such as the type used in food packaging, does not contain any glue.  However, glue may be used in the assembly of the boxes used for food packaging.   The FDA regulates the type of glues that can be used for this purpose and they must be "food safe".

For cardboard food containers that will receive an ink image, paraffin or vegetable oil wax is sprayed onto the surface. This wax protects the cardboard from wicking liquids and allows ink to attach to a smooth surface.  Again, the waxes used on any food container must be of a safe, food-grade quality.

Corrugated cardboard, the type used for shipping boxes, consists of multiple layers of paper.   Glue is used in the manufacturing process for corrugated cardboard to bind the layers.  The glue is sprayed onto the surface of the cardboard to facilitate the attachment of the fluted interior section to the two outer flat layers of paper.   Glue used in corrugated boxes does not have to be "food safe".

The glue used in the manufacture of corrugated cardboard boxes is commonly prepared from corn starch, wheat starch, potato starch or tapioca starch. In fact, the biggest industrial non-food use of starch is as adhesive in the papermaking process.    Making adhesives from food starches is much less expensive than using other chemicals so it is doubtful that this practice will ever change.

Although starch glues are mostly based on unmodified native starches, they also sometimes include an additive such as borax in small quantities (<1 %).   Borax is a term used for a variety of closely related minerals all containing the element boron (an essential mineral).   Although borax is banned in the U.S. for all food-related uses, some Asian cuisines traditionally use it as a food additive, preservative and meat tenderizer.   The reason for this ban appears to be related to adverse fertility and reproductive issues observed in mice fed extremely high levels of borax.

In researching the potential toxicity of borax, I noted that borax has a health hazard rating less than that assigned to common table salt and baking soda.   Certainly these are not items we would want our birds to consume in great quantities but they also aren't something that would hurt them on a minimal exposure basis.   Based on this, combined with the fact that it is extremely rare for our birds to actually eat foreign non-food objects, I don't think that the use of corrugated cardboard in bird toys presents a hazard to our birds.

Oh, and as far as the presence of zinc in the paper towel rolls,  this appears to just be a rumor that won't go away.    Steve Hartman from The Parrot University contacted both Proctor & Gamble and Kimberly Clark, the primary manufacturers of this product in the US,  who both responded that there is no zinc used in the manufacture of their paper rolls.

So, is Cardboard Safe?

We all have our own tolerance level when it comes to issues of this nature and, as such, you will have to make up your own mind.   But, after reviewing this issue I know that I will continue to allow my birds to have fun shredding the occasional cardboard goodie.  Of course, we all should monitor our bird's play style and habits to make sure they don't exhibit the very unusual propensity for eating foreign, non-food items.

The really good news is that the paper bagels and tubes found on the www.MakeYourOwnBirdToys.com website are all from a known and trusted manufacturing source and they are bird-safe! 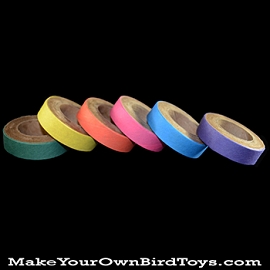 Check out our sister sites for great content, fun and games! 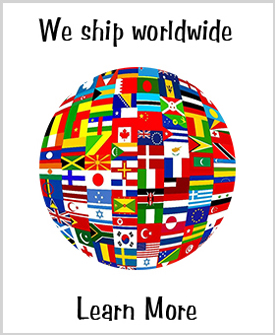 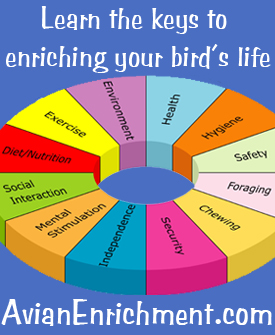 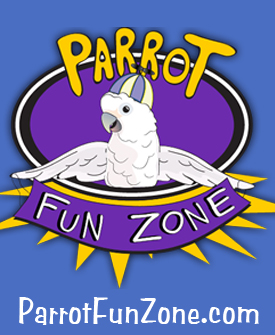 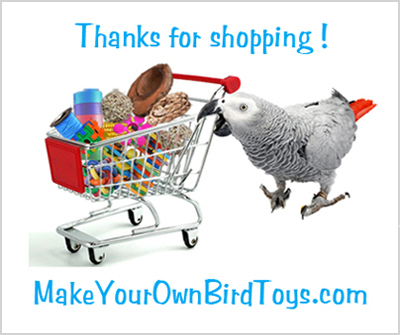